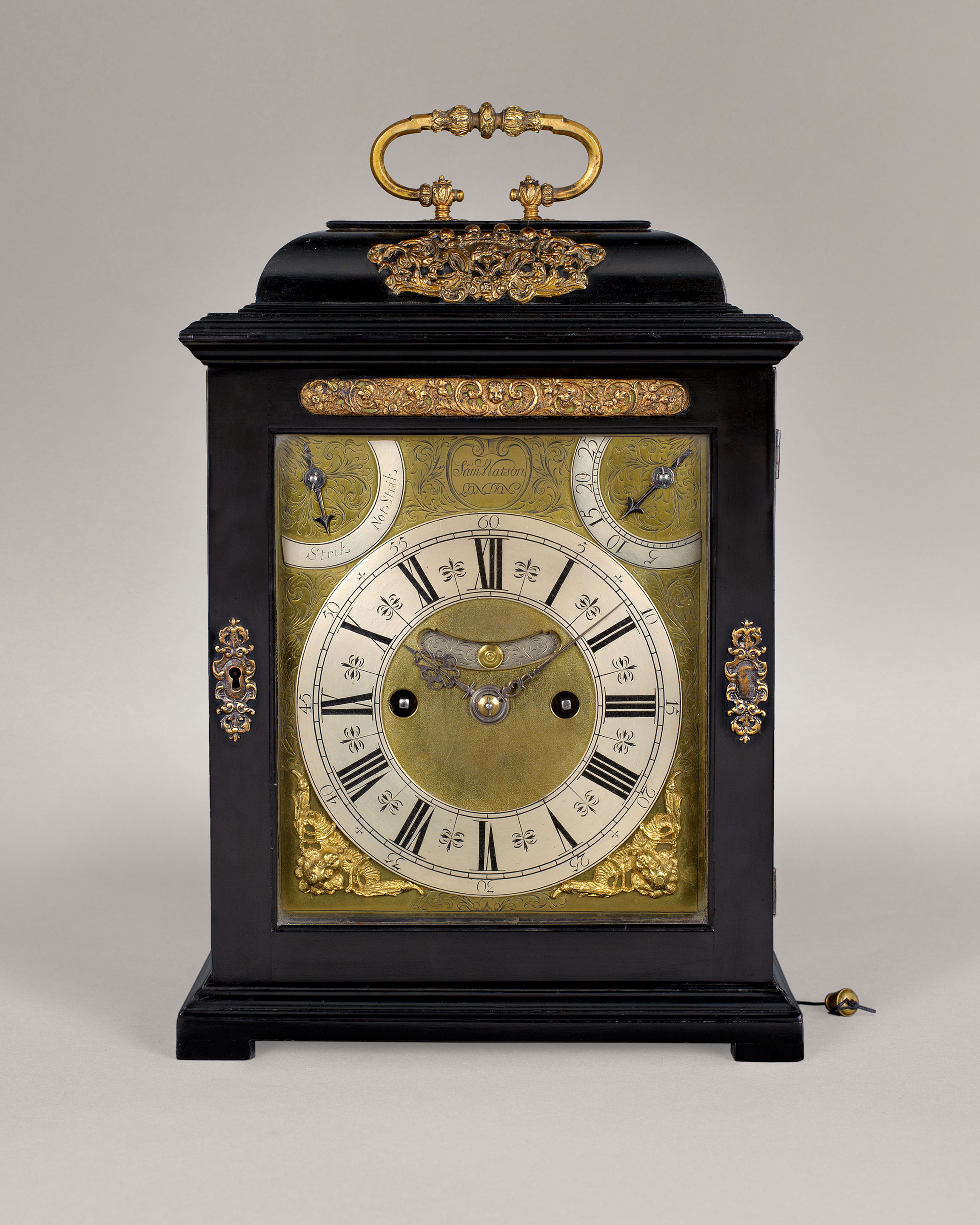 The 7 inch rectangular brass dial has a raised chapter ring with silvered Roman and Arabic numerals with elaborate half hour and half-quarter markers, over winged cherub spandrels and below two silvered quadrants, one inscribed Strik/ Not Strik [sic], the other for regulation marked from 5 to 25, each with a well fettled steel arrow hand and engraved with foliate scrolls to the centres and borders, flanking the central engraved signature cartouche. The dial centre has fine steel hands and a shaped mock pendulum aperture.

The high quality two train gut fusee movement has a restored verge escapement, rack and pinion regulation and pull quarter repeat on a single bell. The rectangular plates are united by six knopped and finned pillars. The backplate is profusely engraved with foliate scrolls centred and the maker’s signature is set within a central cartouche.

The elegant ebonised dome topped case has fine repoussé brass mounts formed of a Viscount’s coronet set among foliage and flowers. The gilt brass sound fret at the top of the glazed door and the vertical applied escutcheons are original along with the tied bud carrying handle at the top.

* The inclusion of a Viscount's coronet (a jewelled band with pearls) in the design of the caddy mounts is very unusual and would indicate that the original patron was a peer. Samuel Watson was commissioned to make two clocks by Charles II and was apparently Charles's 'Mathematician in Ordinary', therefore perfectly placed to take commissions from the Royal Court.

Samuel Watson was an important clockmaker and mathematician who is recorded in Loomes’ The Early Clockmakers of Great Britain. According to Loomes, Samuel Watson initially worked in Coventry around 1680 where he was Sheriff in 1686 before moving to London around 1691. He was made a Free Brother of the Clockmakers’ Company in 1692. In 1682 Watson made an astronomical clock for Charles II followed by another clock which was not completed until after the King’s death. In 1690 this same clock was sold to Queen Mary and is now in Windsor Castle, though in a later case. Watson also made two astronomical clocks for Sir Isaac Newton and invented five minute repeating watches.
Read More Close
Call Us
Make An Enquiry
Make An Enquiry