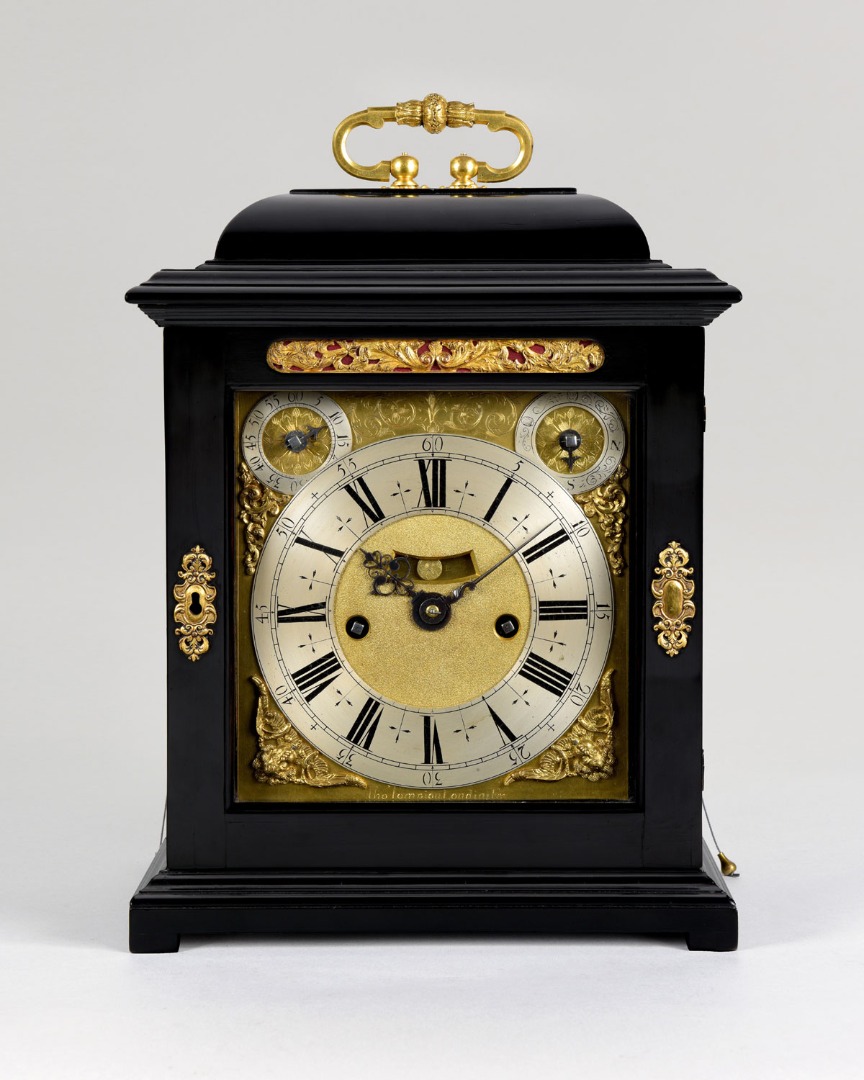 The 7 x 8 inch rectangular gilt-brass dial is signed Tho. Tompion Londini Fec to the lower edge. It has Rise/Fall and Strike/Silent in the top corners and finely chased gilt-brass winged cherub spandrels adorning the bottom corners to the engraved silvered chapter ring. It has both Roman and Arabic chapters and Tompion’s sword hilt half hour markers. The elaborately pierced and finely sculpted blued steel hour and minute hands which are set off by the finely matted centre with its dummy pendulum aperture are typical of his work.

The substantial twin fusee 8-day key wound movement has latched dial feet and further latches for the six ring-turned movement pillars. It has a spring suspended verge escapement with a lenticular shaped brass pendulum bob. The hours are sounded upon a single bell with the quarters repeated via Tompion’s ingenious pull-repeat system. This superb and beautifully designed mechanism operates the quarter hammer and sounds one to three on a further  smaller bell. The backplate with its exquisite foliate engraving is the work of Tompion’s Graver 155. The oval reserve below the centre is signed Tho Tompion Londini Fecit, and it has Tompion’s punch number 182 to the centre lower edge of the backplate.

The beautifully proportioned Phase I case has an oak carcass and is veneered in ebony. It has a chased gilt foliate sound fret along the top cross rail at the front and carved wood ebony frets to each side. The chased gilt brass thistle bud carrying handle is typical of those Tompion used at this time.

* This clock belongs to a small group of about six Tompion table clocks which mark the transition from his Phase I type square dials with no subsidiary dials to the full Phase 2 type which have taller rectangular dials and cases with two subsidiary dials at the top for strike/silent and rise/fall. One such very similar transitional striking and quarter-repeating table clock is The Churchill Tompion N° 168. The ebony veneered case can be attributed to the workshop of Jasper Braem who was Tompion’s cabinet maker at this date.

In 1703 Tompion was elected Master of the Clockmakers’ Company. He is known to have made about 650 clocks, approximately 16-20 clocks a year. Sometime between 1680 and 1685 he devised a numbering system for his clocks and watches which go up to 542.  The present clock is remarkably similar to N° 171 illustrated in figure 125 on page 150 in R.W. Symonds’ book. His numbering  system was continued after Tompion’s death by his successor George Graham.

Jeremy Evans, Thomas Tompion at The Dial and Three Crowns,