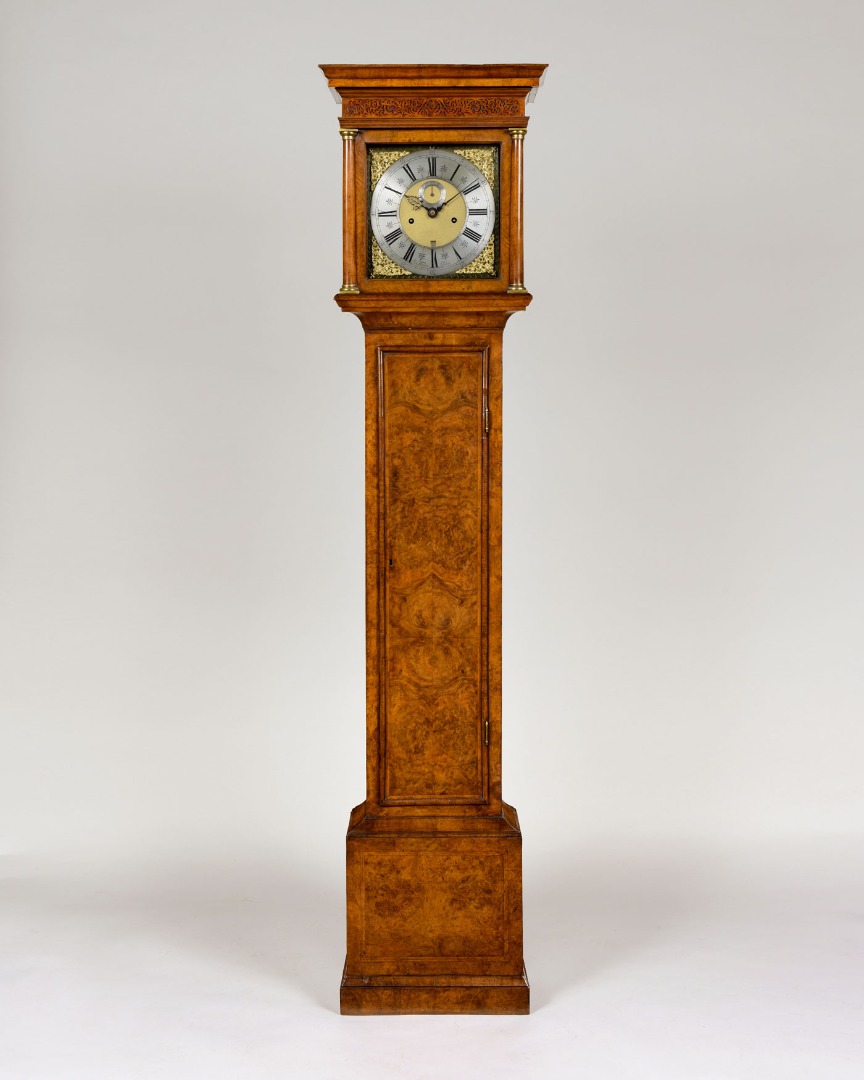 The elegant veneered case is of fine proportions, made using walnut veneers which are a beautifully faded mellow colour and highly figured. The pull forward hood is flanked by turned walnut columns with gilt brass capitals and bases and has a carved wooden sound fret below the cornice moulding.

The 12 inch dial of this clock is of simple elegant design with cherub and crown and sceptre corner spandrels and a matted centre with inset date aperture above VI. The chapter ring has bold Roman hour numerals, an outer minute circle with Arabic numerals at five minute intervals and inner quarter hour markings. The blued steel hands are finely wrought and pierced and the maker’s signature Sam Watson London is engraved on the chapter ring.

The substantial month duration movement has 6 finned pillars. The anchor escapement is controlled by a seconds-beating pendulum and the hour-striking mechanism has an external countwheel strike mounted on the backplate. The movement is complete with its large period brass cased month weights and pendulum bob.

Samuel Watson was an important clockmaker and mathematician who is recorded  in Brian Loomes’ Clockmakers of Britain 1286-1700. According to Loomes, Samuel Watson initially worked in Coventry around 1680 where he was Sheriff in 1686 before moving to London around 1691. He was made a Free Brother of the Clockmakers’ Company in 1692. In 1682 Watson made an astronomical clock for Charles II followed by another clock which was not completed until after the King’s death. In 1690 this same clock was sold to Queen Mary and is now in Windsor Castle, though in a later case. Watson also made two astronomical clocks for Sir Isaac Newton and invented five minute repeating watches.

B. Loomes, Watchmakers and Clockmakers of the World: Complete 21st Century Edition, p.818