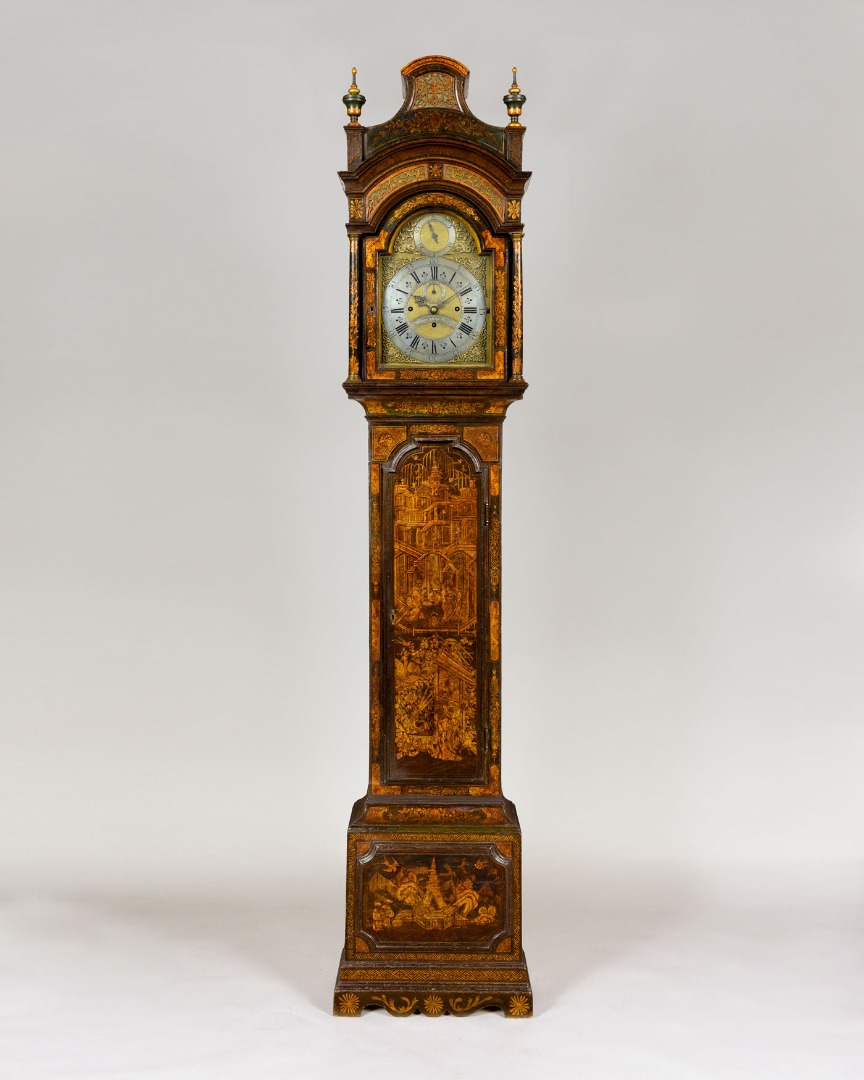 The 12 inch break arch brass dial has an applied silvered Roman and Arabic chapter ring with bold fleur-de-lys half hour markers and a subsidiary seconds dial below XII. The dial centre is finely matted and the maker’s signature is signed in large script in an arc below the centre. In the arch there is a large concentric calendar dial.

The stunning green and gilt chinoiserie decorated case is in a remarkable state of preservation. The clock has a pagoda shaped hood, a raised panelled base with a double stepped plinth and a long moulded bridge top trunk door. The scenes, depicted in raised gilt decoration on the dark green ground, range from an exotic pagoda with figures in a rural setting on the base with groups of diners, musicians and birds in a semi-rural oriental townscape on the trunk door. The front of the pagoda top and sides of the hood have gilt carved wooden sound frets to let out the chimes and hours of the movement. There are profuse sprays of gilt flowers and foliage on the mouldings, hood pillars and flat surfaces and a pair of turned urn finials at each side of the top.

The substantial high-quality 8-day three train movement strikes the quarters on 8 bells and the hours on a single bell.

* William Webster was a member of the Clockmakers’ Company and was the son of William Webster Senior, Tompion’s Journeyman. He took over his father’s business in Change Alley after 1734. He was active until his death in 1776 when he in turn was succeeded by his son of the same name.

This clock was in Spain for many years and it is highly probable that William Webster will have exported it to a Spanish buyer with an eye for an exotic chinoiserie case and quarter chiming movement shortly after it was made in the mid-1700’s.