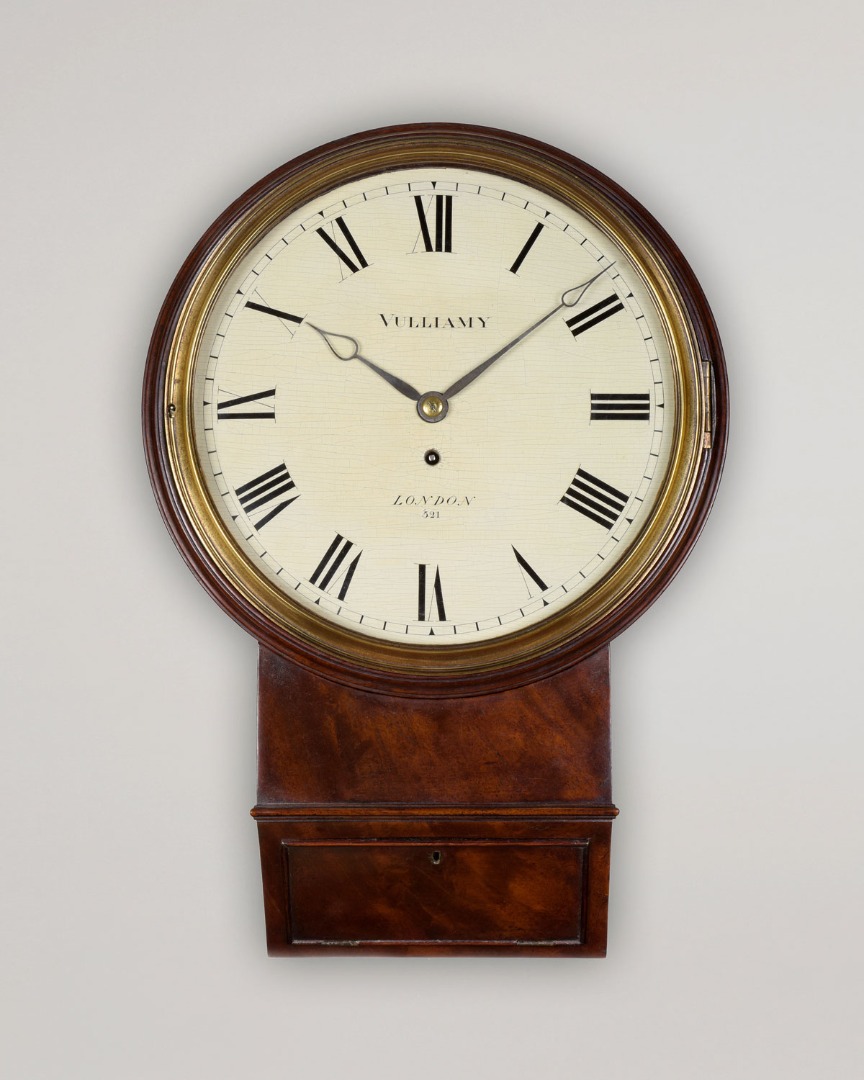 *The Vulliamy family was one of the most important London clockmaking families from 1750-1850 and worked as Royal Makers. Benjamin Vulliamy was the second of the Vulliamy family who succeeded his father Justin.  He was clockmaker to George III from 1772 and was responsible for a number of important clocks made for royalty and the aristocracy. Examples of his work can be found in museums and public collections throughout the world. He was the father of Benjamin Lewis Vulliamy and he died in 1811.

Thanks to the research of Roger Smith, the leading authority on the Vulliamy Family of Clockmakers, we know that Benjamin Vulliamy sold this clock to a Mr Wautier on 27th November 1811 for 9 guineas (£9 – 9s). Jean-Baptiste Wautier was Clerk-Comptroller of the kitchen at Carlton House and thus a leading figure in the Prince Regent’s Household. We also know from the same Vulliamy business papers that this clock was cleaned two years after its purchase and although it was in ‘Mr Wautier’s Office, Carlton House’ it was billed to the Prince Regent’s Office. This almost certainly confirms that the clock was bought for the Prince Regent’s residence at his expense rather than for Mr Wautier’s personal use.

Mr Wautier was clearly a trusted member of the Prince’s inner circle being in charge of the catering department. Like other members of the Royal Household, he was occasionally employed as an agent to find and buy works of art for the Prince Regent in Paris and elsewhere.

Captain Gronow, the personification of the man about town, mentions in his memoirs that Mr Wautier founded an exclusive dining and gambling club in Piccadilly for gentlemen in the Prince’s circle. It became known as the ‘Dandy Club’ and was frequented by Beau Brummel et al as a resort for the most fashionable and wealthy men of the day. It closed in 1819.

B. Loomes, Clockmakers of the World: 21st Century Edition, p.802

The Oxford Dictionary of National Biography 2004