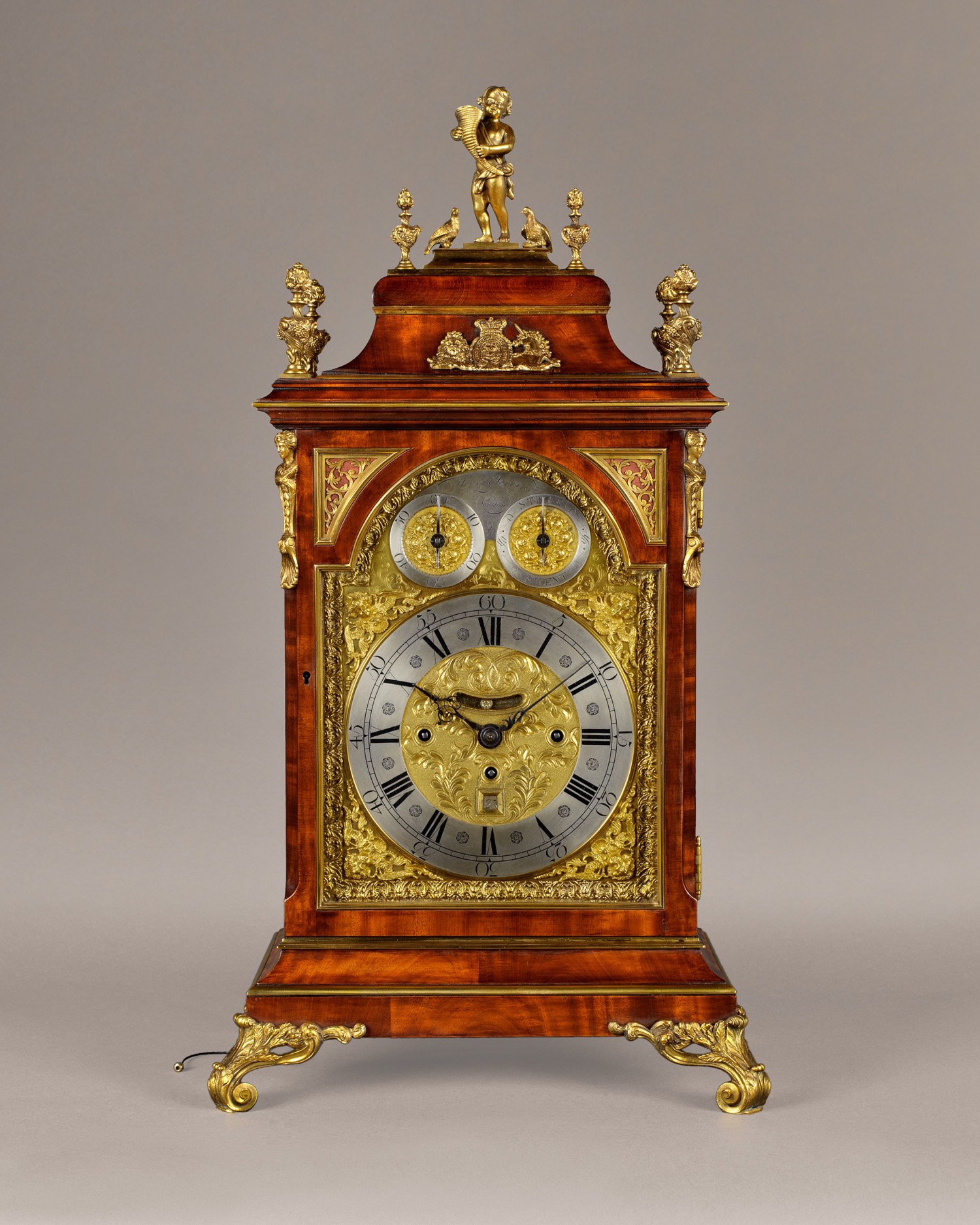 The brass dial has a silvered chapter ring with Roman numerals, Arab five minutes and unusual Tudor Rose five minute markers. The chapter ring is surrounded by quite extraordinary decoration. To the dial corners there are four winged cherub head spandrels, engraved foliate scrolls and an applied cast foliate border. Within the dial centre, the chamfered date aperture and the signed and engraved mock pendulum provide further decorative flourishes. There are also two subsidiary dials; strike/silent and rise/fall in the arch. The maker’s signature, Henry Jenkins London, is engraved on an applied silvered plaque. The blued steel hands are finely pierced and appear to be original.

The exceptional mahogany case stands on four brass ‘foliate’ feet. The bell-top has fine cast brass mouldings. The cherub in the centre holding a horn is flanked by two doves. The finials are remarkably intricate and refined. Within the concave section of the bell-top there is a brass mount bearing the Royal Coat Of Arms. The motto of the Order of the Garter is clearly visible and reads Honi soit qui mal y pense which translates as ‘shame on he who thinks ill of it’.

The substantial triple fusee movement chimes the hours and quarters on 12 bells. The backplate which is also signed by the maker, Henry Jenkins London, is engraved with foliate scrolls, as are the securing brackets and pendulum.

*Henry Jenkins is listed in ‘Watchmakers and Clockmakers of the World’ as working in Cheapside, London from 1730 to 1780. In 1760 Jenkins published a small booklet titled ‘A description of several geographical and astronomical clocks’. Astronomical clocks were a subject Jenkins was entitled to pronounce upon; a superb example by him can be found in the British Museum’s collection of fine period English clocks.

Given its extraordinary quality and the ‘Royal’ mount, it is possible this clock was a Royal gift to a member of the Swedish aristocracy where the clock resided for many generations.